ACT Enhances Score Reports Starting September 2016: The Good, the Bad, and the Ugly 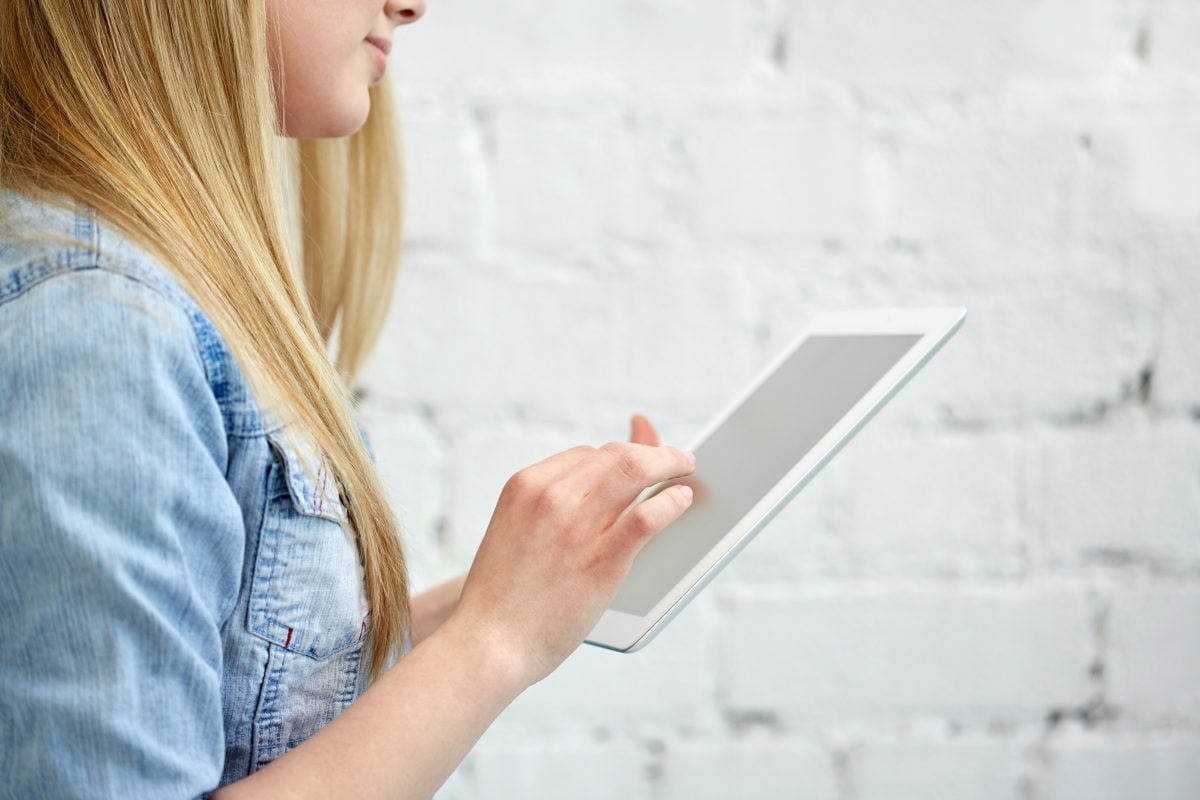 Beginning September 2016, the ACT will roll out its enhanced ACT test score report. The new score report will include several revisions and additions designed to give users greater insight into student strengths and weaknesses. Some of these features will appear on the ACT College Report while others will appear only on the ACT Student and High School Reports.

What changes will be made to the ACT College score reports?

The ACT is replacing the old test subscores with new reporting categories.  Whereas the old subscores broke subjects down by question or passage–type, the new reporting categories break subjects down by the skills required to answer questions correctly. For example, on the old score report, a student who correctly answered a Reading question about a detail from a Prose Fiction passage would receive a point under Reading subscore “Prose Fiction/Humanities.” On the enhanced score report, the student would instead be rewarded under the “Key Ideas & Details” Reading reporting category. The ACT hopes that by providing this level of detail, students will better understand their academic strengths as well as the areas they need to work on. 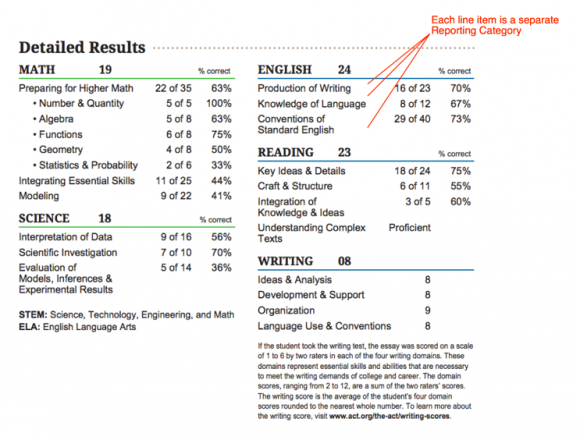 The new ACT with Writing scores will also return to the old 2–12 scale. These scores will still be featured along side the other ACT test scores. They will also continue to combine with ACT English and Reading scores to form the ACT ELA (English and Language Arts) score. Check out last month’s blog for information about this change.

The ACT is also adding a new benchmark to its ACT College Readiness Benchmarks. The STEM (Science, Technology, Engineering, and Math) Benchmark will indicate the STEM score a student would need to earn in order to have at least a 50% chance of earning a B or higher in a related first-year college course. While the ACT will continue to report an ELA subject score, the enhanced score report will not yet include an ELA Benchmark score. 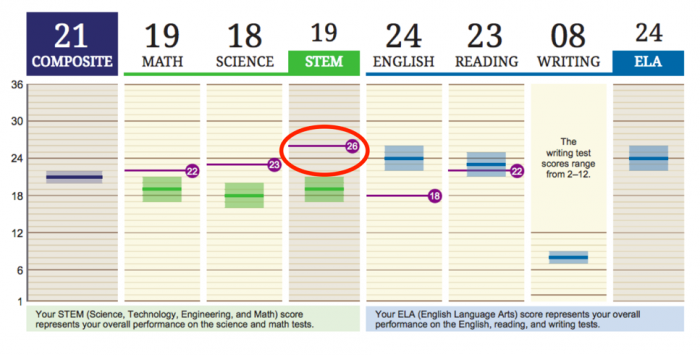 One of the most controversial additions to the ACT test score report will no doubt be the Interest-Major Fit Level reporting metric. This metric pulls from the self–reported interests the student enters during ACT registration to determine how well her interests align with her intended major. The report will generate one of three results—Low, Medium, or High. A low metric would indicate little connection between the student’s interests and intended major whereas a high metric would indicate significant alignment. The ACT believes that a high correlation between interests and selected major suggests an increased likelihood that the student will succeed in the indicated area of study.

What changes will be made to the ACT Student and High School Reports?

The ACT will provide the following additional features on the ACT Student and High School Reports only.

The enhanced ACT Student and High School Reports will also include “ACT Readiness Ranges.” These ranges will begin at the ACT College Readiness Benchmark for a given score and end at the perfect score for that section. With this enhancement, the ACT hopes students and counselors will be able to see at a glance where the student falls along the college readiness spectrum. 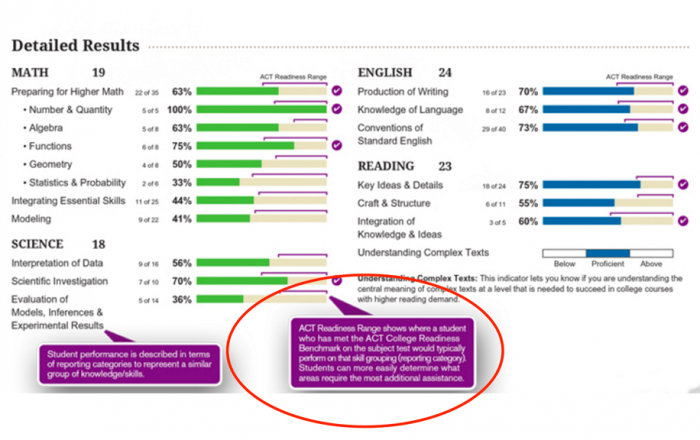 The new Student and High School Reports will also attempt to connect student-reported interests to potential careers. This feature will visually summarize a student’s work-relevant interests along four compass points: Working with Data, Working with Things, Working with Ideas, and Working with People. The Career Connector will then identify 1–2 areas of student interest and use those area/(s) to generate a list of 5 occupations the student may enjoy. In this way, the ACT hopes to give students and counselors ideas to talk about as they plan for the future. 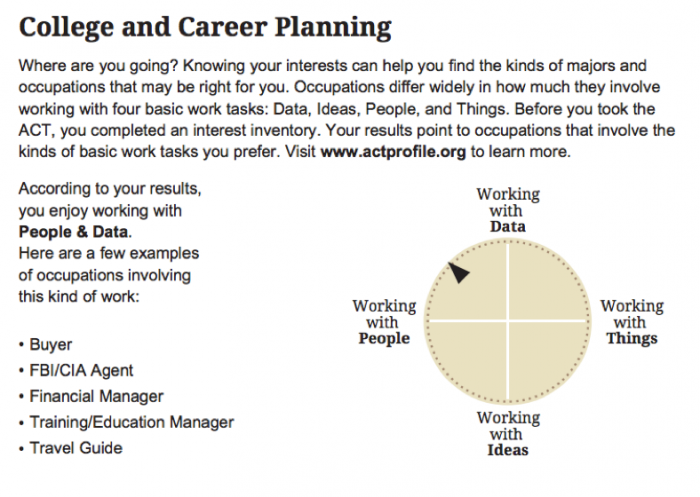 From a student perspective, the new reporting categories are definitely a step up. Under the old model, a student’s ACT test score report told her what questions she was missing but not why she was missing them. Now a student will be able to more readily identify the academic skills she needs to develop in order to improve her weaknesses.

Even though the new reporting categories are an improvement, they’re not perfect. Without the old subscores, students will no longer be able to see at a glance which passage-types and question-types they are struggling with. For example, under the old system, a student could easily see if she was stronger in the Reading Prose Fiction and Humanities passages or the Social and Natural Science passages. This helped the student decide which passages to prioritize while completing the test.

In an effort to provide students with more actionable exam feedback, ArborBridge ACT test score reports combine the best of both worlds: a detailed breakdown of how the student performed on various questions and passage–types as well as how the student can best improve upon those areas.

While we’re happy to see the ACT add more detail to its score reports, only time will tell how useful some of these metrics are. The STEM Benchmark, for example, has some serious drawbacks.

First, it assumes the ACT Math and Science scores are similar enough to be combined in a meaningful way. We’ve said it before and we’ll say it again, ACT Science tests a very different skill–set than does ACT Math. Whereas ACT Math tests concrete math knowledge and application, ACT Science tests the student’s ability to read and understand charts, graphs, and experiments. It is therefore possible for a student to earn a very high score in one subject and a relatively low score in the other subject. For example, a student who earns a 30 in Math but a 20 in Science would receive a 25 STEM score. This score falls below the minimum 26 STEM Benchmark set by the ACT.

Second, the ACT determined its STEM Benchmark by examining student academic performance in the popular STEM first-year college courses calculus, biology, chemistry, engineering, and physics and then researching how those students performed on the ACT Math and Science tests. This single-dimensional approach to student success neglects to consider critical outside factors including how interested the student was in the topic as well as how motivated she was to succeed.

Perhaps the most worrisome component of the enhanced ACT test score report is the Interest-Major Fit Level and corresponding Career Connector. To fill these features, the ACT will ask the student a series of questions during the ACT Interest Inventory phase of ACT registration. The ACT will then compare the student’s responses to the student’s selected major during the application process to indicate (a) how aligned her interests are with her major and (b) what careers she might enjoy pursuing.

First, these features are still in the “beta testing phase,” meaning that they could change over time. Because they’re still under construction, there is a real risk that they will falsely predict academic and career interests.

Second, these two indicators rely on the answers students give during an ACT registration survey. We have all carelessly clicked through online surveys to get to the important stuff, and there is no reason students would be any different.

Because the Interest-Major Fit Level and Career Connector are still evolving, we urge students not to rely on them exclusively when making decisions about the future. Instead, consider using these metrics as a “jumping off point” when talking with counselors and parents about academic and career goals.

Learn more about the updates to the ACT:

Why You Shouldn’t Worry Too Much About the Changes to ACT Math and Science
ACT Writing Test Returns to 2–12 Point Scale
Should You Take the ACT Online?